Before a loft conversion, most people’s roof space would be what’s known as a ‘cold roof’, well ventilated to have maximum air flow to stop timber rot and mould growth from damp, with insulation along the ceiling joists.

Having a loft conversion will necessitate moving the insulation from the ceiling joists to between the rafters which will restrict airflow and, without proper added ventilation, might then cause the timbers to rot.

If the house has felt in the roof then, before the new insulation is fitted in the rafters, a 50mm air space has to be left below the underfelt. This creates what’s called a ventilation path and lets air escape from the roof space to stop condensation forming.

A ventilation path is not enough on its own and, for sufficient air flow to protect the roof from damp, small gaps should be cut along the eaves to let air enter from one side and exit on the other side of the roof.

If your roof doesn’t have felt beneath the roof tiles then air is able to escape through the tiles and ridge vents aren’t needed, but If the roof is angled at more than 35 degrees then you may need to have them added.

When fitting storage space in a loft along the eaves, builders often use timber stud walls. If the cupboards are seated against ceiling insulation, there is a possibility that black mould could form, but fitting plastic ducts above the soffits will prevent this, allowing ventilation but also keeping the needed insulation.

Windows are an obvious source of ventilation in a loft space and high efficiency double glazed units must be fitted. The opening for the window or roof light should be equivalent to 1/20th of the floor area of the room, and a trickle vent should also be fitted at high level. Skylights should also have ventilation holes drilled into the rafters on each side of the window.

There have been various changes in technology over the years, from traditional cut rafter and purlin roofs built before 1965 to modern trussed rafter roofs and, depending on the way your roof has been constructed, you may only need a small amount of ventilation.

Many new roofs have insulation boards fitted above the rafters, creating a ‘warm roof’, and the addition of a breather membrane in the roof as underlay means that a ventilation path may not be needed.

There are also alternative methods available to provide ventilation. A single room heat recovery ventilator can give continuous air change, bringing in filtered, fresh, warmed air from outside, which helps prevent condensation and mould growth; or a passive stack ventilation system could be fitted, which works because of the movement of air due to the difference in temperature between inside and outside and the effect of wind passing over the roof of the building. 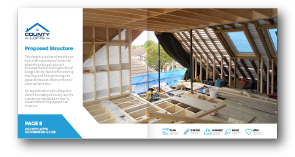